Script does not show up

Nothing is showing in the preview and a Not found message appears during live calling.

No script is marked active

There is an error in the script

This error message is received in the admin script preview:

There is likely a syntax problem in one or more of your script questions.

Check through each of your script questions for any bad formatting and make corrections. If you cannot locate the problem you can create a duplicate of the script and start deleting questions one by one to see which one is causing a problem. Delete a question, save, then refresh your preview to see if the problem has cleared up and repeat if necessary.

This message is received in the admin script preview:

The script explainer visible if logic in the “starting_question” was not removed:

Questions do not show when clicking or All questions appear

Script does not advance as expected.

Incorrect visible if conditions set on the question(s) expected to appear. 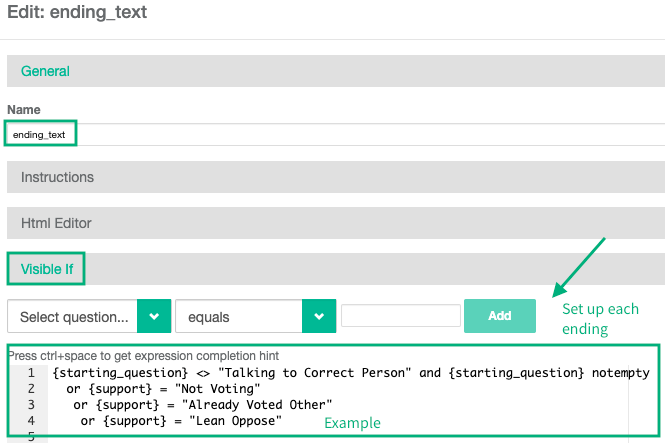 Script questions jump upward or start at the bottom

While clicking through the script the following question appears above the previous question.

If you find you still need help, submit a Script Review with what you need to be reviewed. We are here to help! ThruTalk (Legacy) support staff will identify clear issues and explain how to correct and avoid the issue moving forward. We will also communicate general advice where we see the chance to share improvement opportunities.

B
Brian is the author of this solution article.